Harvest Time Network Ministry founder of this ministry, Tyda Harvey (of the Navajo Nation). the ministry is 8 years old started in January 2013. This ministry is design to reach out to our Native American and 1st Nations people of North America, Though it's design for Native people we reach out to all people for they are God's people. We have seen the hand of God move in a very powerful way among the Native Nations, We believe that the Lord has call the Native people of the Land to rise and stand for God. A chosen generation a royal priesthood. 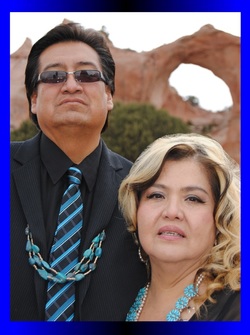 Ron & Tyda Harvey "Harvest Time Network Ministry"
﻿Harvest Time Network Ministry is a ministry that is networking with many different ministry across North America connecting Tribes in Various ministry, Churches, Apostles, Evangelist, Pastors, Teachers, Prophets, of the five fold ministry to Government leadership, Harvest Time is reaching out to all people of the world. Apostle Ron & Tyda Has travel countless miles to various Native Nations & other countries of the world,  to bring encouragement and blessing to the Nations that Jesus is the answer to all Nations. Thousands have responded to the call of our Lord. Healing's have taken place in their ministry and many have been bless by their teaching that Jesus is moving in a very powerful way Today. Because he's the same yesterday, Today, and forever. He has not changed, and we have seen that in the ministry of Harvest Time Network Ministry. They have bless the people over and over again in every season with gifts that the Lord has given them. Apostle Ron & Tyda Harvey has dedicated their lives to be a servant of the Lord most high. Apostle Ron & Tyda Harvey has been under the authority of their spiritual father Pastor / Apostle Jerry Tom. Pastor of the Window Rock Christian Center in Window Rock, AZ. (Capitol of the Navajo Nation). for the past 38 years. Ron & Tyda Harvey has been very influential in building the Window Rock Christian Center. A Hub for Christian gathering to worship Abba Father moving the kingdom of God forward and seeing changes in peoples lives. For the past 30 year they served faithfully, Then in 2012 God moved so mightily on Tyda speaking to her about Gathering the Tribes of North America Calling them to Gather, what a struggle that was so many questions and how hard it seems to do, but after one month of this struggling with the idea, Can it be done, how is it going to work, the cost of it, so many questions, but the Lord said "Trust Me" Finally it was Settled in the heart thus "Harvest Time Network Ministry" was born January 2013. From that point on we have seen the Lord work in various Tribes of North America, We have seen the tribes come to the Capitol of the Navajo Nation setting up an 80 x 120 tent and each night over 1,000 people fill the tent and people coming from Alaska, Canada, America, tribes coming together to worship and encourage each other and hearing what God is doing in their land. What and encouragement to hear the many things that are happening in other parts of the world. God has given every tribe in north America a vision and the connecting of the dots began, and now we are networking together with many Brothers and Sisters in Christ Jesus, Eyes are opening up to New things and doors are opening to new opportunities for our Nations and for The United States of America. Truly the Lord is moving, Truly the giant has awaken and is now standing over our land and nations. "Listen for the Lord is speaking" Hear his voice Do you hear? He is showing us the way. We are now working on our 3rd Annual "Gathering of Tribal (2015). - Nations" this time there's people coming from across the world From China (7 orient nations) coming we have Grand Chiefs coming from Canada, Alaska, We are setting up a 100 x 140 tent with about 1800 chairs and we know that it tent will be filled it's going to be a Wow thing. Jerusalem called 2 years ago they have invited us to host The Gathering of Tribal Nations in Jerusalem, That will happen in  the Near future  "The Gathering of Tribal Nations in Jerusalem" What is the Lord doing? We shall see, everything is happening according to his will. ﻿- By a miracle of God we went on a trip to Jerusalem March 1 - 9, 2019 what a powerful moment in time that was to go the the Land Where Jesus was.....We have met the Jewish Agency's top people, Went to the President of Israel house we presented to them gifts from our Nation and our President and Vice President. what an honor that was to go and meet these wonderful people, those door have been open to us, what an opportunity that is for us and the Native Nations of the North America.
America.